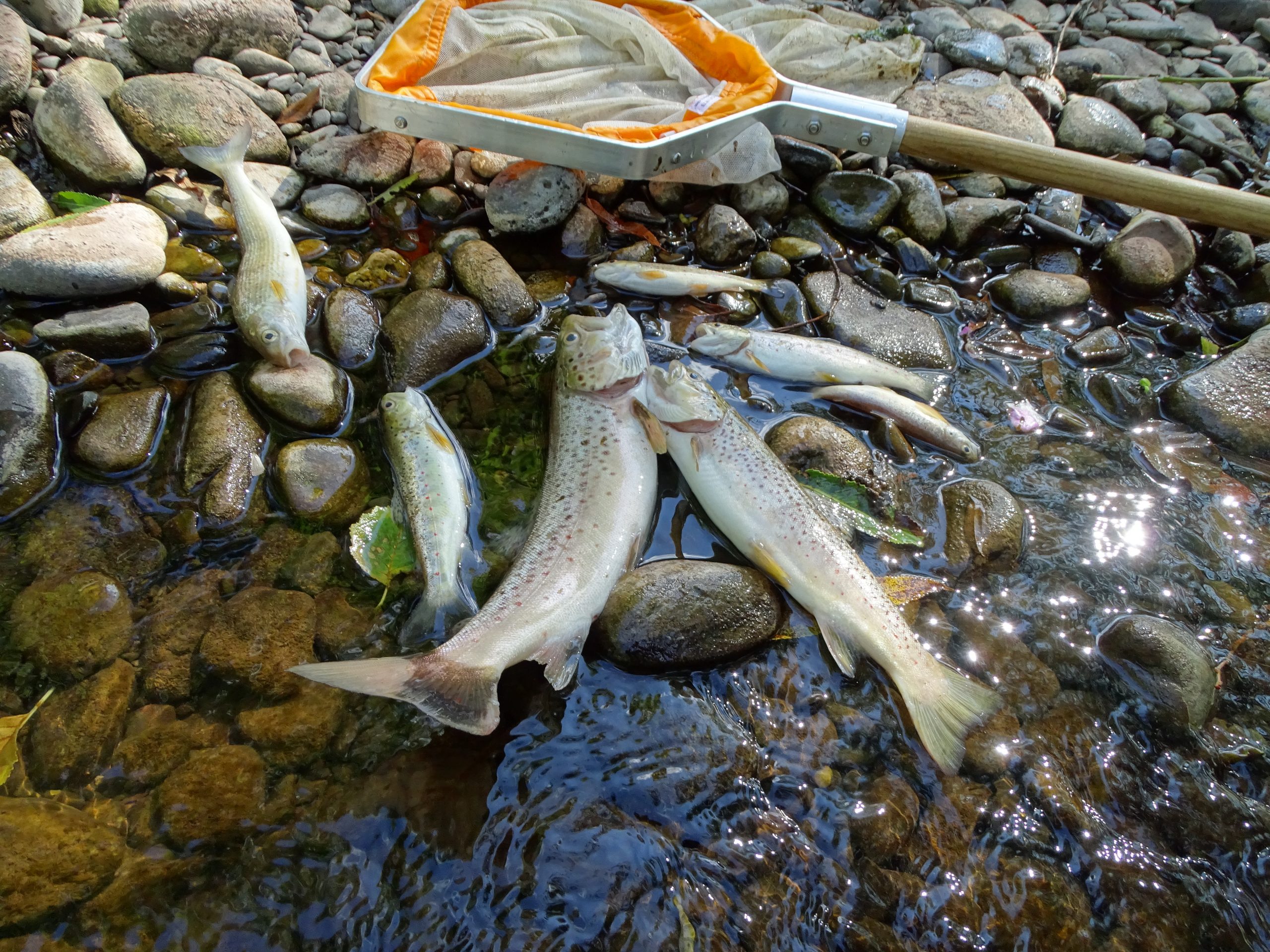 I would prefer to be writing a piece about a beautiful summer evening fishing for trout – leaves rustling gently in the warm summer breeze; the river’s mirror sheen surface broken here and there by the gentle, dimpling majesty of a feeding brown trout – however, these images of beauty and grace are all too often destroyed (and I mean that literally) in Wales, with Welsh rivers seemingly seen as nothing more than sewer systems…of which both (Welsh rivers and Welsh sewer systems) boast some of the worst in Europe.

Such visions have been enjoyed by this evolutionary wonder in the UK since the last ice age and, in warmer climates, for more than 15 million years (substantially longer than you or I have even existed).

Back in 2016 one of the clubs I help manage (Gwent Angling Society) experienced a pollution incident on one of our waters, specifically, the Afon Llynfi, a tributary of the River Wye, located just outside of Bronllys.

The 2016 incident resulted in a substantial fish kill, including wild brown trout and grayling, salmon parr and various fish fry, bullheads, eels, etc. The only organisms not affected by the pollution were the invertebrate populations (caddis, mayflies, midge, etc.) which are vital to such ecology systems and an important and primary food source within rivers.

Over the years that followed, any fish which moved back into these empty but recovering waters were able to find food, and a huge amount of restorative work has been implemented by the club and its volunteers (as recent as last Monday, in fact) in order to help bring this destroyed habitat back to its original health. During the 2016 pollution incident, it was an absolute miracle that the invertebrate populations weren’t destroyed, however…

On Thursday 30th July 2020, a further pollution incident occurred, eradicating all species of fish, eels and lampreys (as well as those listed during the 2016 incident), however, this time the pollution incident also had a significant effect on invertebrate life, as well as the protected white-clawed crayfish (for which the river is designated a Site of Special Scientific Interest (SSSI)).

Every piece of recovery work implemented by the club and its voluntary members since the 2016 incident has been undone and, once again, miles of river are now utterly devoid of life and covered with carcasses. Local resident, Emily Tilling, stated to BBC Wales that ‘there were crayfish crawling up the bank to escape the water, and fish lying on the rocks gasping for breath’.

In effect, this latest incident has completely sterilised miles of a designated SSSI. Let’s be clear here, when I say ‘sterilised’, I mean entirely that – every living organism in this stretch of the river down to the confluence of the River Wye at Glasbury has been eradicated.

Such is the level of uncertainty, National Resources Wales (who, at time of writing, continue to investigate this latest incident) has even issued a notice to all wild-swimmers using the nearby River Wye, advising them not to swim, unsure of the contaminants and whether they linger in the water system.

So, what’s all the fuss about? Fish aren’t fluffy, cuddly (cwtchy), puppy-eyed numbers, nor are they the majestic feathered rulers of the skies, both of which are protected by the (and rightly so) RSPCA and RSPB (respectively).

No, these are wild, beautiful, native fish which, for some reason, are deemed worthless and/or simply not worth the time in protecting, save for those efforts donated freely by volunteer bodies, river habitat improvement groups, anglers, etc.

When incidents such as these occur, I’m always brought back to a depressingly relevant article by Andrew Griffiths via his GlassJet blog, Life is Cheap When You’re a Fish.

Yes, fines are sometimes issued by the NRW once perpetrators are identified, but not in all cases, and never with such severity as to deter future incidents from happening. Sometimes a big and scary warning is issued…‘Don’t do it again, or else!’ But, or else ‘what’?

Would the same ‘warnings’ be issued if a swathe of natural countryside had been burned down? How about the destruction of an owl sanctuary and all its feathered inhabitants? A barn of little puppies? You get my point. To requote, life is cheap when you’re a fish.

In this day and age where more and more people are scrambling to better enjoy the countryside, are clogging natural tourist spots and demanding improved access and amenities on mountain summits (content for another post altogether), it really does show that the welfare of our natural world (a world in which we’ve existed for a mere flash) has become a secondary concern.

Despite the factual, evidence-based data provided by the Gwent Angling Society, there have been a number of hugely disappointing reports via BBC Wales (see below links), reports which have been massively underplayed. However, it has since been refreshing to read reports via ITV Wales, WalesOnline, and The Guardian (links below) which do provide a truer picture and the severity of the damage caused.

So, where do we go from here (again)? For now, the investigations by Natural Resources Wales continue and, as of yet, the contaminant and its source have not been identified.

Let us hope there is sufficient evidence to prosecute so that such ‘mishaps’ stop occurring. Of course, such lobbying will continue to be spearheaded by volunteers, such are the letdowns and empty promises provided by those who have been officially tasked and financed with the custodianship of such wonderful habitats.

For more information concerning this recent incident, feel free to browse the below links, or follow the conversations via Twitter. More will be added as/when the information is made available.

Wish us luck. We’ll need it.